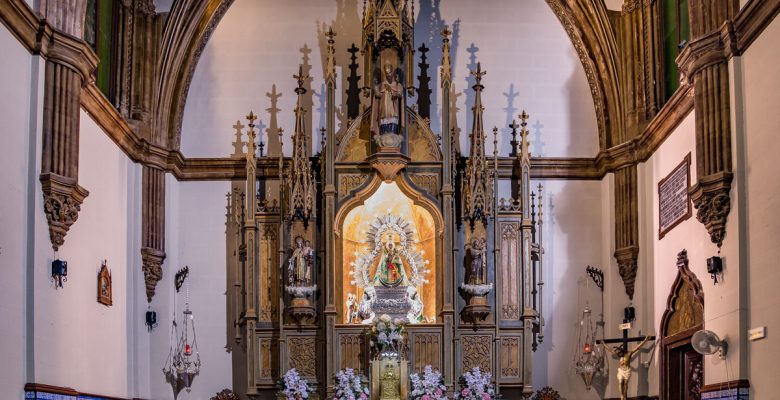 Already in the SEVENTEENTH century, known by the historian D. Antonio Clods of the existence of a chapel which says it was founded in the name of Ntra. Mrs of the Head and that was ruled and governed by the Brotherhood, Brotherhood and Gentlemen Deputies of Ntra. Lady of the Head, where they also made their councils and boards. This chapel was attached to the hospital of the Brotherhood possessed in the street Earthenware and she was celebrating her feast on the first Sunday of may, after the one celebrated in the sierra.

The simple hermitage is associated with local master stone and had a facade simple constituted by a vain access with arch and jambs slightly shaded, and highlighting in its upper part a niche of great size, also semicircular arch, framed by pilasters and entablature with accents and decorative elements that appear to be heads of cherubs and floral motifs. Inside, a few images that reflect the scene the Appearance, with the pastor to the left and the Virgin, on a small hillock, to the right. It seems that this group of sculpture changed to a canvas with the same reason.

It is a neo-Gothic temple in brick, began to be constructed by D. José Corbella Penis in the year 1918, on the site of an old chapel, and to which he added a few meters to the Sacristy assigned by Mr. Rafael Perez de Vargas, Conde de la Quintería. The cost of its construction were financed by Ms. Agustina Pérez de Vargas y Pérez de Vargas, Countess of Real Grace and the Marquise of Santa Rita, completing the works in the year 1921. The blessing of the new temple took place in the month of August of the same year, being presided over the event by the Bishop of Jaén D. Manuel Basulto Jiménez. The altarpiece of gothic style, was commissioned by the priest D. Antonio Medina Saenz, first Chaplain of the new Hermitage, being its author Casa Enrique Valencia.

The facade is divided into two floors by a cornice of webbing. The flats are organised in four sections by means of four pilasters decorated with brackets overlapping. In the first body is the door, his vain with a pointed arch arquivoltado, highlighted by the tympanum decorated with a high relief by the sculptor andujareño Agustín García the Valley, which represents the appearance of the Virgin to the pastor. In the second and fourth corps opens a large window of warhead that welcomes three pointed arches, and the third body, the more narrow, it is decorated with two blind arches pointed that cover a large part of the wall.

The interior is a single nave, divided into three sections, covered with vaults of warhead, being the second star. The nerves of the nose cone are collected in the media attached to the wall. In the first section situates the high choir, in line with the cover, the second section is the most comprehensive and the third amplitude similar to that of the choir and high with respect to the other where the altar stood. The entire wall appears plastered with a beautiful plinth tiles typical of Andújar.