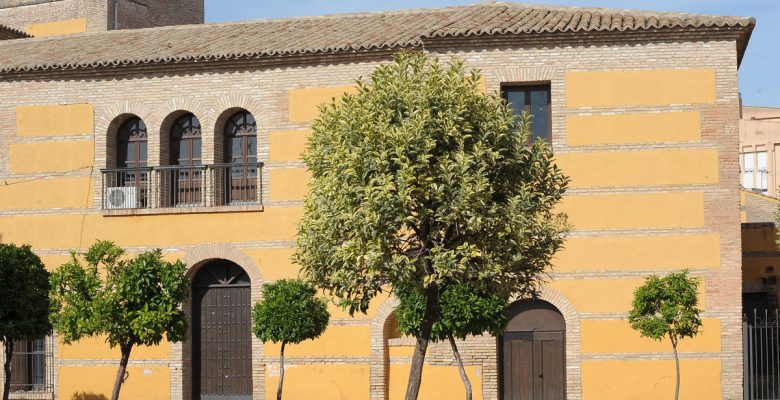 Andújar is a town flat that invites you for a pleasant stroll through its streets and squares, in which the visitor can admire its monuments:

In the plaza of Spain, we find the current town Hall, a Home theatre and the ss. XVII-XVIII, who retains the corral where he played the works of theatre. In the same square there is the parish church of Saint Michael the Archangel, with important reliefs carved in the choir loft and the cancel entry, near its bell tower there is a baroque fountain in the EIGHTEENTH century.

Following the road Master, we find the palace of the Children of D. Gome, s. XVI, where stands the tower with decoration of indian influence, the stables that retain part of the trough and a crest of nobility, as well as a magnificent arcaded courtyard and wineries. Behind the backs of the same appeared some remains of the arab wall. In the same street stands the House of the Coello de Portugal in the EIGHTEENTH century, and the Tower viewpoint of the house of Cárdenas and Valdivia, known as the Tower House, built in the s. XVI of mannerist style by Christopher Cardenas, and his wife Teresa Valdivia.

Arriving at the hill Serrano Dish we find the House of the Servants of Mieres, manor house in the baroque style of the EIGHTEENTH century. A little later, in the hill of Santa Ana, with the palatial House of the Cárdenas del s. XVII, with a chapel dedicated to Saint Anne, porticoed courtyard, gazebo and grilles exterior of the s. XVI. In front of this stood the Palace of Seconds of Cárdenas or of the Customs of the XVI century and which has attached to the facade of the Palace of Pérez de Vargas and Gormaz, this one of the XVII century and was moved to this place in the TWENTIETH century. Is close to the Tower of the Source Deaf, old tower of the city wall almohad on whose front appears the coat of arms of the city in the SIXTEENTH century.

The Church of Santa Maria whose construction dates back to the XIII century is now a temple of renaissance and mannerist in the interior of which can be seen several treasures, such as the painting of "The prayer in the Garden" by el Greco. In the same square, you can visit the mudéjar Tower of the Clock, of the XV century built in homage to the king Carlos V and the House of Albarracín, cover of the end of the FIFTEENTH century it was the seat of the city Council. Next to the Church of Santa Maria, is the Chapel of the Christ of the Agony built at the beginning of s. XX, neo-gothic style, by the Counts of la Quintería as crypt pantheon for the family.

Follow calle Alhóndiga, we find the little chapel in which niche they worship the Christ of Providence, continuing on the road Mosque appears the Church of Santa Marina, old arab mosque. Nearby is the Church of Santiago, from the XIV century, with a chapel of the EIGHTEENTH century dedicated to the Christ of the Column whose vault presents a luxuriant decoration in plaster. In the hillock Santo Domingo is situated in the Former Convent of the Jesuits, of the s. XVII, where stands the dome baroque in the ladder-type imperial and the Chapel attached, and that in the NINETEENTH century became the City Hospital. Not far away is the House Cradle of the EIGHTEENTH century, and is currently the headquarters of the School Workshop.

The Church of St. Bartholomew from the end of XIV century or the beginning of the XV century, was the first parish church built outside the walls, and has a beautiful Sacramental chapel. In the same district is located the Convent of Jesus Maria, founded in 1495, and which owes its name to the nuns of the order of St. Francis of Paula. Very near it is the "Picture of the Virgin", is a little chapel outdoor that is home to a box with the theme of the Virgin of the Head. In front of him is the Church that belonged to the Convent of the Capuchinas, which today is the Museum of fine Arts.

In the central street of Earthenware, is located the Chapel of the Virgin of the Head, neo-Gothic temple in brick that was built in the early TWENTIETH century. In the same street appears the Convent of Saint John of God, and current residence of the elderly, where it stands out greatly, his Church, of baroque style in whose main altar is located the chapel of the Virgin of the Anguishes of the XVII century. In the streets the Nuns is the Convent of the MM. Trinitarian, s. XVII. In the neighborhood of la Divina Pastora is located in the Arc of Carlos III, the old gate of the City, neoclassical style, dates from the EIGHTEENTH century. Finally we can visit in the same neighborhood, the Plaza de Toros, the end of the NINETEENTH century which highlights the cover of neoárabe or mechur, as well as the fact that it was built by digging in the earth.