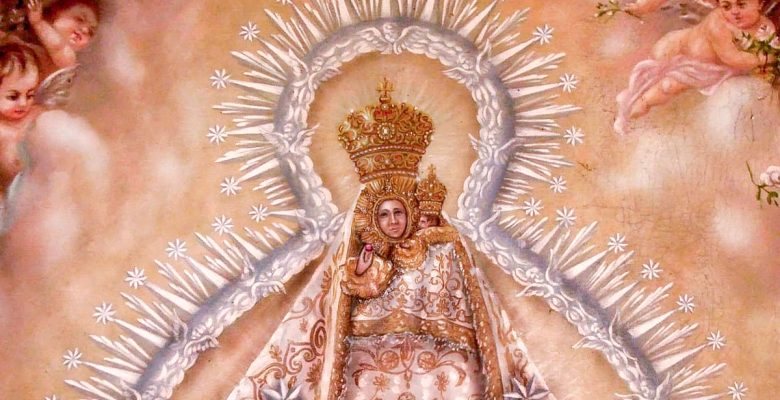 How was the original image that, according to legend, is the pastor. To this question have tried to answer the historians; even without delving enough to leave a clear and comprehensive description of it. Even no-one raises the possibility that over the centuries could have been changed, as was also the custom in the church, to break down a lot by the smoke of the candles that the devotees will put. The alleged primitive image disappeared during the aforementioned war, being replaced in 1944 by another sculptor of Álora (Málaga), José Navas Parejo, representing the seated Virgin, carved in wood, which in its left arm has the Child Jesus; in whose left hand holds a ball in the world, while she holds in her other hand a strawberry tree. The entire image is painted. It was restored in the years 1993 and 2017 by José Luis Ojeda Vessel, restorer of works of art.

The description of the possible primitive image is not made until the SEVENTEENTH century, but as it was covered by the sheets, no one tells us to have looked beyond which could be seen with the naked eye, conditioned by the mystery and secrecy that the same printing. Even though the authors of the six hundred would have had access to what is forbidden, it is unlikely they could have left that and more if it wasn't a full cut. The town was not ready to admit another idea that is not outside what is popularly said about it. The iconography of the SEVENTEENTH and EIGHTEENTH centuries has led to the idea of the picture, dressed, which took root in all the devotees.

In the TWENTIETH century, being the brother of the brotherhood array, Rafael Pérez de Vargas, conde de la Quintería, years 1921 to 1923, it became a description, perhaps, the most reliable, in which is said that it was an image of byzantine style, head thick and disproportionate to the body, slim neck and lower limbs very short, while sitting on his throne; his height estimated at about thirty-five centimeters, and to supplement your smallness and give greater slenderness was sitting in a suit of armor made of strips cross shaped pan.

Another hotly debated topic, in the iconography of the Virgin of the Head, it is about the object held in the right hand. To some it seems a strawberry, fruit, typical of the Sierra Morena, and other an apple. Really this last fruit that I had in the beginning. In 1984, the Peña “El Madroño” Andújar presented, to the image that is worshipped in the shrine, with a strawberry tree, silver and jewels, made in the local workshop of silversmith, Matthias Chamorro. The act of imposition of the Virgin was in charge of Maruja Bellido, big sister consort of 1985.

When he starts to worship?. For historians Salcedo Olid, Clumps of Oak and Pérez Guzmán, the cult starts from the first moment that the pastor is the image, not providing any date, to say that the festival also begins in the THIRTEENTH century; however, none of this can be confirmed with scientific rigor.

Also, you will try to find the antiquity, the origin of the worship, in the Middle Ages, using the Cantigas of Alfonso X The Wise and the Book of the Hunt of king Alfonso XI of the Salty (1314-1350), in both works do not appear references to Ntra. Lady of the Head.

With the above pointed out we don't want to deny the existence of devotion to the Virgin in the THIRTEENTH century; since we do not have documentation about it. What should have happened is that it was a minor cult or only at the local level, which had not transcended even the universality that is achieved after in the SIXTEENTH century, in which historians such as Ambrosio de Morales (1513-1591) and Argote de Molina (1548 - 1590), the quote clearly, the same thing that writers such as Miguel de Cervantes and Lope de Vega, and make mention in their works.

Disappearance of the image
In August 1936, they arrived at the Sanctuary a group of civil guards and fellow countrymen, women and children, who had come out of Jaén fleeing the war. Some occupied the rooms of the monastery, and others to the houses of the guilds and save. Also, some of them stayed at a New Place, in a total of some two hundred thousand people.

The command of this contingent assumed the captain of the Civil Guard, Santiago Cortés González. The republican troops asked for surrender of the sanctuary, to which Cortés refused and began a siege which lasted until may 1, 1937, after long hardships of the besieged. One of the consequences of this struggle was the disappearance of the image of the Virgin mary, which according to the defenders of the place it was hidden by the aforementioned captain, who dies in the battle. However, in the ABC newspaper published in Madrid on the 7th of October, 1939, appeared a news story, illustrated with a photo, which announced the appearance of the image of the Virgin of the Head in Valencia, specifically in the house of a driver. We have to take into account that part of the survivors of the siege of the shrine had been led to this last city. Nothing was heard since of the Virgin, all of them have been hypotheses and conjectures about the disappearance. Long ago we knew a box on the concealment of the image in the environment of the sanctuary, painted by a survivor who participated in it. In 2008 we carried out an archaeological excavation on the site that indicated such a person, without having found the image. In reality, the mystery remains unsolved.

Without any doubt, an important figure in this story is the pastor, through which the Virgin is manifested to the town of Andújar. Legend has it that among the christians that fed sheep in those mountains of the Sierra Morena, he had a pastor's natural Colomera, by then in the possession of the arabs, the son of captive christians of that villa, which had also lived in Arjona (Jaén) doing the same job and having achieved freedom, was in Andújar occupied in the pasture.

As we saw the pastor had a physical disability, the who is healed miraculously. No historian of the writers from the SEVENTEENTH century to the TWENTIETH, nothing bring new about it.

As for the name, in the SIXTEENTH and SEVENTEENTH centuries, no one says how it was called. We'll have to wait to the next century to meet him. Will Pérez Guzmán in his book who will call Juan Alonso de Ribas. As a priest you was, according to the christian tradition, I put John to the pastor. Again we are faced with
a hypothesis; since the aforementioned author does not cite the sources on which it is based. For some or other Alonso is a proper name or surname. In the Hoya del Salobral, a hamlet of Noalejo (Jaén), there is an inscription in the chapel of the Virgin of the Head, in which, according to legend, there he rested and slept Juan Alonso Rivas Rodriguez on his way to the hill of The Head of the Sierra Morena. As we can see, it ignores the classical tradition of the writers listed above. In reality, this is all based on the false cronicones of the SEVENTEENTH century.

The pastor could be one of repopulating the area of the río Jándula, next to the hill of The Head, from the town Lions Ribas, since in those times of the Middle Ages, the surname indicated the town of origin of the person. In addition, existed in the FIFTEENTH century outside the walls of Andújar a chapel under the invocation of the “San Bartolomé de Ribas and San Ildefonso”. It is a place in a family linked to the group of settlers from Ribas which had been established in the city andujareña in the early years of the christian presence, it had an inscription that read: “This (hermitage) did Pedro Juan de Ribas, vaquerizo,” which we discover other member of the family dedicated to the grazing cattle.

If the pastor would have been Colomera would have been called John of Colomera, according to the tradition of the time, as I have before pointed out. Even a priest of that town said that in his church, he was buried in a chapel of Our lady. Lady of the Head, when that town was in the possession of the arabs until 1486, the year in which it remained uninhabited, having been the parish church much later. The above does not deny that the pastor out of Colomera, what should happen is that the one who puts the family name, Rivas, does not take into account the above.

To Colomera the figure of the shepherd has a great importance, so much so that the city council appointed him to his Beloved Son and Honorary mayor in 1997. In addition, there is a monument in bronze, the work of Manuel López Pérez.