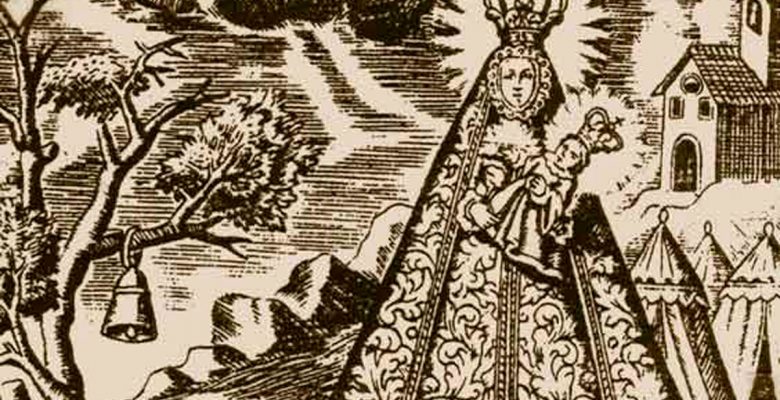 Account the oral tradition that, when you come to Spain, San Eufrasio, a disciple of st. James the apostle and first bishop of Andújar, brought with him an Image of the Blessed. Virgin on the worshiped and devotion, and whose author was Luke. In the seventh century when Andújar was occupied by the arabs, our greatest hid the Sacred Image among a few rocks in one of the higher slopes and inaccessible parts of the Sierra Morena to prevent its desecration.

Five centuries later, already reconquered Andújar by Fernando III the Saint, says the voice of the poeple that on the night of 11 to 12 August, 1227 was the pastor of Colomera (Granada, spain), Juan Alonso Rivas, taking care of the cattle of neighbor Arjona, when he began to see strange lights in the top of a hill, and to hear the incessant sound of a bell. He left then the pastor amazed, among rocks and thickets, to the top of the mountain known as the Head and in the concavity of two rocks, which ministered unto him of the tabernacle, he found an Image of Our Lady.

To give testimony to the town of Andújar of such a miraculous discovery, and as proof of this appearance, the pastor, who was maimed in the right arm, was cured. Before the amazing event many citizens and the authorities were on top of the mountain where they found the Holy Image, as the pastor had instructed them. It was then taken to the city being deposited in the Church of St Mary Major, where he soon began to go to worship.

The iliturgitanos, built near Andújar chapels in San Amancio and San Gines, but the intention of the Stma. Virgin, was that the people would build a chapel on the hill where he appeared, on several occasions, he disappeared from the Church where they were trying to, and establish his cult, to be found again in the place where he wanted to take her home. Finally, Andújar, understood and agreed to the wishes of Ntra. Lady and began to build on the hill of the Head of a temple dedicated to his worship, under the title of "our LADY OF THE HEAD".