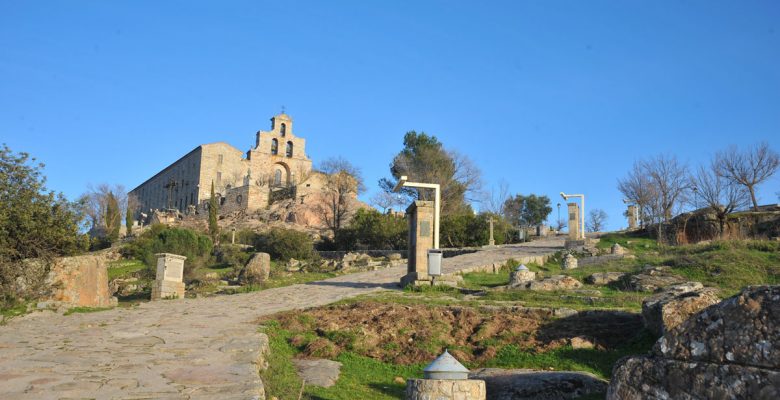 The Actual current Sanctuary of the Blessed. Virgin of the Head is located in the heart of the Sierra Morena to 32 km north of the town of Andújar, inside of Sierra de Andújar natural park at an altitude of 686 m. on the level of the sea. In the market access to the Sanctuary is a great attention grabber in the steeple by its height and the size of its three bells, as well as the large central balcony on the entrance door of the temple, with a balustrade of the forging of iron, the beauty of a great ornamental. In addition, we can see in this place, some monuments, such as the one dedicated to Cervantes.

The temple is built with blocks of granite, well-tilled, and it is of renaissance style, it consists of a single nave and centred with a barrel vault reinforced and arcs that rest on massive pillars that form between them, chapels, niches, six to each side, and at the intersection of the walls with the vault, a ledge of stone that runs along both walls throughout the temple.

Located in the centre of the nave there is a monumental lamp of the byzantine style, with an inscription around reading a Latin text of the gospel of St. John says: "Ego sum lux mundi. Qui sequitur me nom ambulat in tenebris sed habebit lumen vitae (In7,12) and another of the psalter, which says: "O Oriens splendor lucís aeternae et sol iustitiae veni et iIlumina seated in tenebris et umbra mortis" (psalm 106). It was made in the workshops of forging and casting of metals from the School of Arts and Crafts in Granada, the same as the grate and the pulpit.

Lately, they have covered the lunettes of the vault with scenes from the life of Virgin Mary which have been painted in oil on wood by renowned artists of Andújar and other cities of the region. The five on the left side of the temple, represent: The apparition of the Virgin to the pastor (Jerome Kills), Coronation of the Blessed. Virgin Mary (Daniel field), Pentecost (Fco. Holes Sanz), the Descent (Rafael Toribio), and the Visitation (Manuel Garcia-Ibáñez), of the other part, and in the same order, are: The Annunciation (Fco. Medialdea), Flight into Egypt (Martin Bemo), Adoration of the Magi (R. Navarro), Asunción (Luis Hamlet), and Presentation (Alicia Hamlet).

In the chorus there is a magnificent organ, the gift of the Civil Guard, which was opened by the famous organist and master Guridi. Behind the main Chapel is the sacristy. They created, recently, a marian museum that preserves a large amount of furnishings and works of art that show the importance that through the centuries has had, and has, Ntra. Lady of the Head.

By separating the nave from the chancel is a beautiful fence renaissance, a true reflection of the early SIXTEENTH century, and which was restored for the School of Arts and Crafts in Granada while preserving the charm of the best gates cathedral. In the top center, above the door is a medallion supported by angels, represents the appearance of the virgin to the pastor, as the crowning of the artistic rejado, an ordeal that closes an aperture with an arch.

The presbytery up two platforms side at half-height of the hanging paths hangings of scarlet, under an airy dome with two windows that let in natural light, and two spaces under the stands where it is usually located by the representatives of the Brotherhoods and Brotherhoods.

To the sides of the sanctuary are located at the mid-height, two tribunes of the marked paths hangings of scarlet, under an airy dome with two windows that let in natural light, and two spaces under the stands where recently installed two boxes that has enriched the picture gallery of the Sanctuary. In the centre stands the high Altar formed by a large block of granite stone, flanked by two both also in granite.

The altar-piece, recently restored, is built in a pine Flanders, two-tone, with moldings, cornices and gilt decoration. In it stands a large central space in which you can see the chapel of the Blessed. Virgin, and in the niches on the side are carvings St John of matha, founder of the Trinitarian order, and San Eufrasio, pattern Andújar and the diocese of Jaén, being its author the grenadian artist Emilio Navas Parejo.

To access the dressing Room we have to get through the hallway-corridor of the north wing of the Shrine known as gallery marian where you can watch photos with different marian titles in Spain and abroad. In the vestibule of the gallery, stood sheets with the mistresses of the eight provinces of Andalusia, and in the upper part of a large entry with the following verse of the Magnificat: "Blessed is she will say to me all the regions, because the mighty one has done great things for me-holy is his name" (Lk. 1,47).

The locker room where he is enthroned the Image is coated with marbles, each corner has attached a couple of beautiful columns of the same material, finished off the inside of a dome.

At the exit of the locker room, we find a staircase in the SEVENTEENTH century, part of which have disappeared recently, and where we can contemplate a magnificent box of R. Navarro. From here you can access to the sacristy, located below the locker Room, and the Courtyard of the appearance where is located the stone on which appeared the Image forming part of a porticoed courtyard with various plants for ornamentation.

In 1992, he inaugurated the new lighting to the exterior of the Shrine, together with the roads and the square, the result of an agreement between the City of Andújar, the association Matrix and the Community of the Sanctuary, and in collaboration with the foundation of Seville of Electricity. Six years later, it opened, also, the interior lighting of the temple.

To know the schedules of the masses up to date you can visit the official website of the Basilica and Royal Sanctuary of the Virgen de la Cabeza in Andújar: