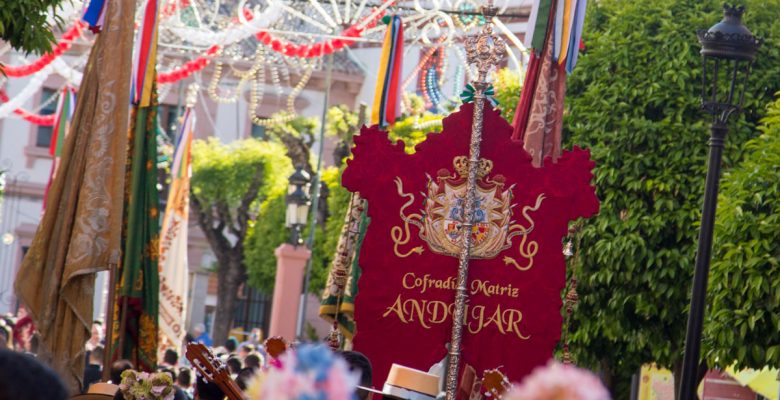 Heraldic description of the coat of arms of the Brotherhood Array

It consists of shield, cut and-a-half party, where it represents the first field in the silver cloud in your color charged Anagram Mariano in azure, with golden crescent and ring the doorbell, submontada, crown of twelve stars, all of them of gold.

In the second field is the coat of arms of the city of Andújar average party and cut off, in the first field, gules, castillo de oro crenellated, mazonado de sable and rinse of azure, in the second, silver, eagle sable, and in the third, azure, a fish of silver and two keys of gold and the head, a bridge in its color, mazonado de sable, all surrounded by a border of silver with four lions interns gules.

In the third field, coat of arms of the province of Jaén, quartered in a cross, first and fourth, of gold, and second and third, gules, with a bordure containing fourteen squares, showing alternately, gules, a castle of gold, and of silver, a lion rampant gules; over all, the oval with the iconography of the Holy Face in your color. All the furniture appear loaded on royal mantle, crimson, lined ermine, in the pavilion, and with a royal crown closed to the buzzer; surrounded by the contour by the fleece of gold. To the outside, in punta, amulet that picks up the name or motto of the Brotherhood and six flags crossed, the following metals and colors: a gold, a silver, a blue, and silver, one of gules and argent, a vert and azure.

The first field, refers to our Blessed mother, the Holy Virgin of the Head, collecting the invocation with which he addressed to Her by the Archangel Gabriel, Hail Mary. Get this logo in blue, on a background of silver, as they are the colours of the Guild, with the moon and stars in gold, according to the vision of the Evangelist John, and on a cloud, in memory of the Glorious Assumption of the Virgin Mary to heaven in body and soul, the title to which it is consecrated their Real Sanctuary.

The second field, picks up the arms of the city of Andújar, of which, the most Holy Virgin. the Head is the patron saint since the year 1909, on the occasion of his Coronation-Canonical, Grace and Patronage that were achieved by Pontifical Bull of S. S. Pius X.

In the third field, is represented the coat of arms of the province. Jaen, in consideration that our Owner is the patron saint since 1959 of the Diocese in this province. All the furniture appear on royal mantle, a royal crown closed and fleece considering the Title of Royal and Illustrious Brotherhood, and having been to several of the Spanish monarchs who have belonged to this Brotherhood, who enjoys this Title from the visit made by S. M. Isabel II in 1862. The flags, collect the various titles and honors that the Guild holds, as they are; Real, Ilustre, Array, Patron saint of Andújar, Patron saint of the Diocese and canonised. Next to them, appears a tape or amulet that contains the name of the Brotherhood.

The Brotherhood Array of Andújar is a pilgrim towards the future, introducing new features and delving into his past, solemnity, and most deeply rooted traditions.

The renovated shield is going to include the ‘rose gold’ which gave him the Pope Emeritus Benedict XVI in the year 2009 and the tiara with the keys of St. Peter testifying to the declaration of the Sanctuary a minor Basilica at the Pilgrimage of the year 2010. These symbols are connected with the nomination which leads to from now on Pontifical Very Primitive and Ancient Real Illustrious Brotherhood of the Womb of the Virgin of the Head. The shield goes in back of the banner is going to give you to get acquainted with the beginning of the acts of charity on Christmas and in the flag Array

In this project, we have involved several rocks mirabrás and individuals. The shield has been made by the embroiderer Peter Palenciano olive Groves. 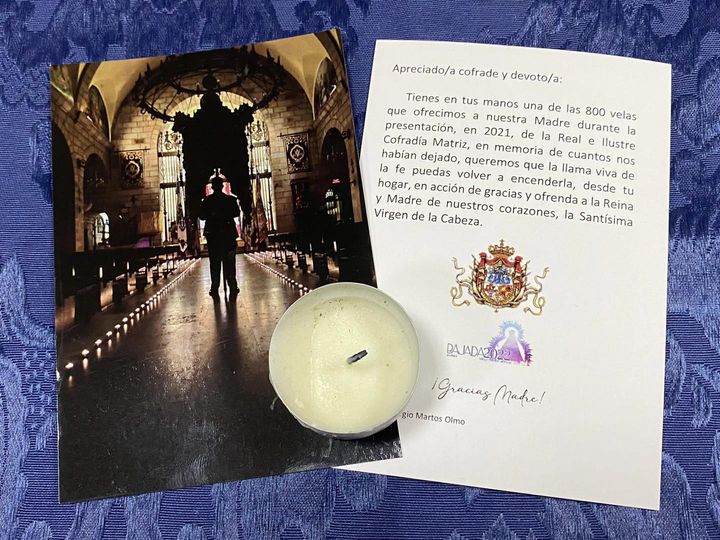 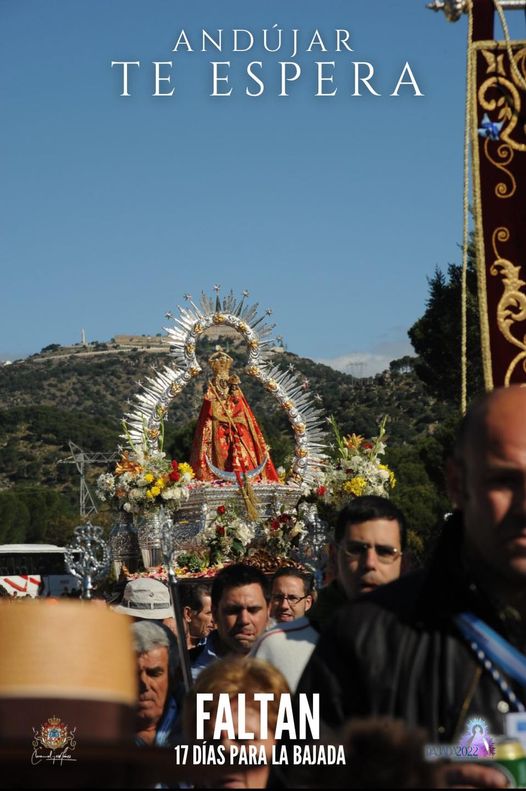