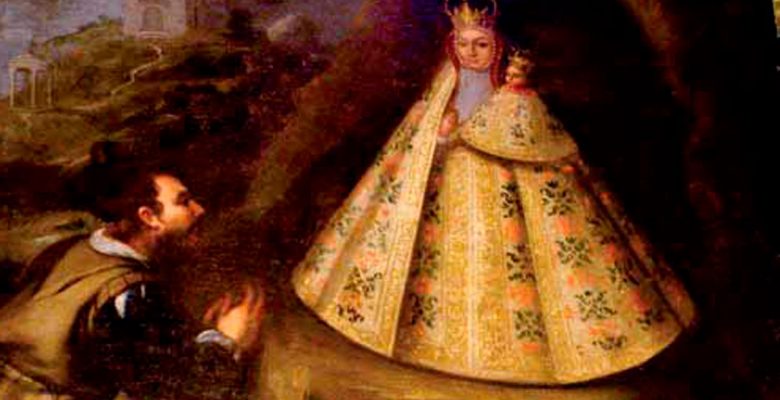 In the different representations that throughout history have been made of the miraculous appearance of the Blessed. Virgin of the Head to the pastor, there are a number of common characteristics that appear in almost all. One of the iconographic symbols most repeated has been the presence of a tree, symbol of nature and of eternal life, of which hangs a bell, sound element that warned the pastor and that has a component mythological important, is identified with the creative power and to take the form of a vault, with the sky, this being a symbol of the virgin moles

Nor does it lack, in the iconography, the presence of the shepherd, and the sheep, representations, they also appear in many quotations from the gospel, where the flock are the constellations and the pastor is the moon. Other elements that, although anachronistic at the time of the occurrence, loaded with symbolism the scene, are the representation of the rock with the Sanctuary and the celebration of the festival with the characteristics shops refuge for Brotherhood.

It is also usual in the representation of the appearance, the presence of two birds, beings, winged, that unite heaven and earth as a spiritual element and symbol of the human soul, one is usually an owl, the other a bird of bright colors, night and day, as an allegory of the cycle of creation where the virgin Mary is a medium that makes possible the fundamentals redemptive, as well as the presence of flowers native to the Sierra Morena.