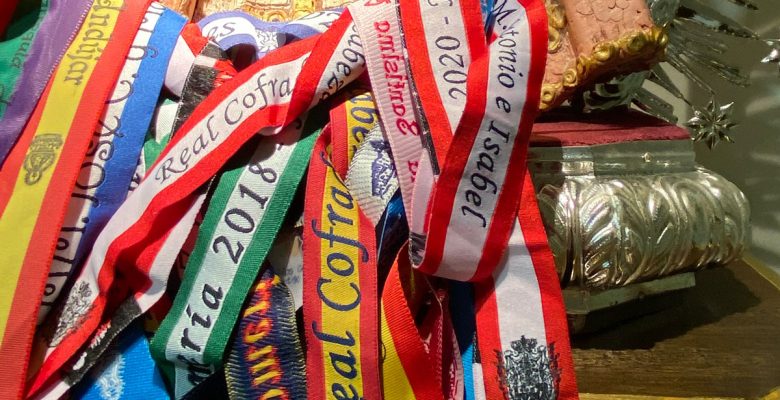 Those who attend the festival have always carried some memory of it, preferring to those objects that have been near the Virgin; because it does not have the same value personal and sentimental one that has been blessed or not. Hence the tradition to carry on, the past centuries, and to the priests their state, measures and rosaries to pass on the mantle of Our lady. Lady of the Head. Such objects are hung in a fork and approaching, so are being loaded, of that divine energy which was of great importance for you to receive it.

A I remember a very peculiar has always been the “whistle”, so called to differentiate it from the “whistle”. The latter has in its interior a small cylindrical object, generally, that, by blowing tour, while the “whistles” nothing contained within, with two openings; one for air to enter and the other for output, having at its lower end a hole to be able to pass a string and hang it on the neck. The “whistles” have joined to another set of figures, in the manner of toys to give to children. The source could be Latin, where it formed part of some ritual magic to any deity that was able to receive worship in the hill of The Head. When purchased alone, are made of mud, sometimes decorated, and others do not; however, when put together with figures, currently, they are made of ceramic and are painted with different colors.

We are faced with a musical instrument very popular, its use requires no previous knowledge, having as purpose to only emit noise for fun. The purchase of “whistles” sometimes did the pilgrims by celemines, to go regalándolos to the children of the villages they were passing as they were returning from a pilgrimage.

Something common to all the pilgrimages are the “state”-tape close of colors that carry engravings of the printing press, the name of the Virgin or a Saint, in our case of the Virgin of the Head - and the “measures”, so-called because they represent what is high the image of the Virgin –ribbons are twice as wide as the state and printed the same as the others. Currently can be purchased at the shrine countless memories of this holiday.

In the Procession of Andújar is the traditional matching mules with ornaments for cheerful and eye-catching colors that give a special prominence to the road. The mules are atalajan with "jáquimas" in their heads and are usually embellished with tassels, fringe and strawberry trees colorful and with mirrors that reflect light to give a characteristic luminosity of the passage of the cavalry.

This is a travel chair that, since the Middle Ages, was used to assemble the women in the chivalry; it is a chair of scissors, with legs curves that attaches to the backs of the mules harnessed to cover artistic quilts and shawls embroidery that will see only his back and arms of wood which in some cases are richly carved. In the jamugas, the ladies with their finest feel of hand, being very typical and characteristic see them parade, the entrance and exit of the village, shouting for joy at the crowd to the voice of ¡VIVA LA VIRGEN DE LA CABEZA!

State of the Virgin

The state ribbons are satin or silk of various colors that traditionally have the measure of the height of the image, and hangs a medallion with the image of the Blessed. Virgin of the Head and tend to decorate with a bobble mode tassel is also of satin or silk. These state often carry inscriptions alluding to the Virgin and dedication of the people who perform it. Usually charged by the dozen to give as a gift in a Procession to the family and friends that will take as a sign of participation in the Procession, being curious to see Them with the neck, upload them to your back of the Sanctuary.

In the procession of the Blessed. Virgin of the Head, it is typical to see the well-known piticos of clay, consisting of a small sounding instruments made out of clay by hand, and in its lower part has a hole for passing a string and hang it on the neck by way of whistle. Today it is still manufactured as it was in the SEVENTEENTH century where they have their origin, to be used on the feast of the Procession of a markedly popular character, for whistling to the Brotherhoods of visitors to its entry in Andújar the Friday Procession, he did it to drum hit and so funny, increpaban to the Andujareños.