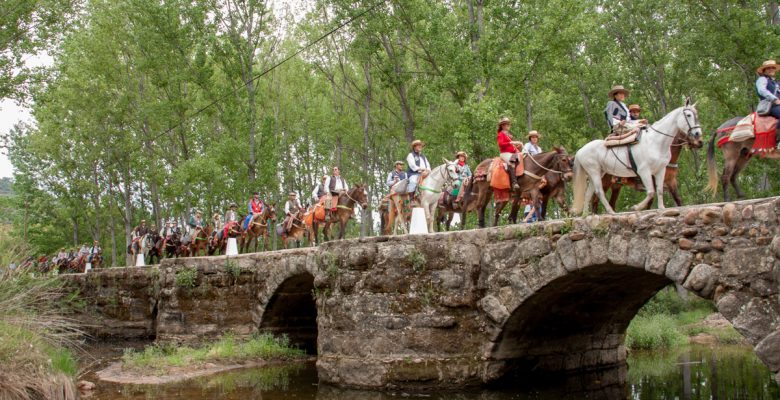 Those from Andalusia wanted to get to the sanctuary, they had to take the road, crossing the Sierra Morena, on the basis of Andújar, took him, well-known for “The way the Shrine” and later “Old Road”; when you open a new channel of communication in the TWENTIETH century, the road Andújar to Puertollano (Ciudad Real), J-5010.

In the journey the pilgrim and rosemary was going to find a series of chapels, such as the San Mancio and Santa Quiteria, Santo Domingo and San Ginés, all disappeared; but with the name of the last and next to the former site, the rock, The Pilgrims of the Dawn, he built another based on the trace, which he did in 1994 Sebastián Torres López, technical architect, and was opened in 1997.

In the same way and going to San Ginés, another rock, The Pilgrims, was placed in 1995 a monument to the pilgrim, called Valentine's day, in the so-called balconcillo; name of the place where the wayfarer given for the first time a view of the sanctuary. This is a work in bronze by the sculptor Manuel Lopez Perez, a resident of Andújar. The blessing of the sculpture was conducted by the bishop of Jaén, Santiago García Aracil.

At the beginning of the road, on the walls of the convent of Jesus Mary of Contemplative Nuns of San Francisco de Paula, Minimal, promoted by a tailor, was laid in 1613 a painting of the Virgin of the Head in a little chapel in the open air. At the same time this urban enclave is a must-attend event for any pilgrimage to the shrine.

Before taking the “Old Road”, front of the cemetery, on the initiative of the department of the Celebrations of the city Council and funded by the industrial construction, Antonio Villegas Hamlet, was placed a mural in ceramic, the work of Francisco Holes Sanz, a neighbor of Andújar, which shows the route that the walker should follow until you reach the house of Ntra. Lady of the Head. In 2004, the rock “The Carretas”put a monument to the cart romera, made in stone by Sebastian Delgado, being blessed by the P. Domingo Conesa and placed in the stream of The Rooster. This milestone in the old path, commemorating the first ascent in a cart, pulled by mules, to the shrine in 1979 by a group of people, that years later, they created such peña, specifically in 1983.

A natural obstacle that the pilgrims and palmers were in this journey, if you came from Andújar was the río Jándula at the site of New Place. To pass through it is built wooden bridges, which, with the flooding by the waters of the spring, were swept away; hence, the guild local Ntra. Lady of the Head was raised to build a solid and secure, to which in 1601 he obtained an important economic support from the city council; but we need to wait fifty years for the stone bridge was finished. In 1651 he worked in his factory under the control of the bed Matthew Monsoon, giving concluded. It retains today.

The other access to the sanctuary, highway, came at the initiative of Joaquín María Serrano and Manuel Garzón Houses, local politicians. As neither the city council nor the Provincial government had money to take effect, the parliamentarian Mr. Guerrero was proposed in the Congress of Deputies, its inclusion in the General Plan of Roads, but outside of Andújar to Puertollano (Ciudad Real). Such a proposition was accepted unanimously on 16 December 1887, continuing the necessary paperwork in may 1888. But it'll be many years until, at the beginning of the TWENTIETH century work of the path of the road. In 1900, the town hall was pending the commencement of the works to solve the serious problem of unemployment that the neighbors were suffering. A novelty for the era was the iron bridge, popularly known as “iron bridge”, which was placed to save the step of the río Jándula. This road is not paved, in three sections and years, until 1964.

In the area of the Vineyards of Peñallana was built in 1948, the parish church of Ntra. Lady of the Head of The Vineyards.

Private is the chapel, abandoned and in ruin now, that arose in the kilometer 14, under the patronage of the Immaculate Conception. There already existed in the EIGHTEENTH century.

Along this road were placed three important milestones. In 1923 the jaén José del Prado and Palacio – minister of Public Instruction - ordered sculpt in the Km. 16700, in a stone chevalier, in the place of Valdeinfierno, some verses in honour of the Virgin of the Head.

In the year 1965, and by the initiative of the Cultural Association “Ateneo de Andújar”, joined by the monteros in all of Spain, was put on the km 28 a monument to “Lonely”, the wild boar of the sierra whom Jaime of Foxa and Torroba, he had dedicated a book in 1961. The sculpture is of Luis Hamlet Gómez, Andújar.

Being the brother of the Real Brotherhood Array in 1986, Santiago Peralta Martínez, placed in the Km. 15 a sculpture in stone, a man with the left arm extended pointing at the sanctuary and in the other, gives the hand of a child. Is the monument to the Pilgrim, which has an inscription with lyrics of Joaquín Colodrero Ávalos, secretary of the brotherhood of 1959 to 1996.

Monuments on the way

The roads that lead to the Shrine, either the old road as the moderna road, are dotted with monuments that remind us of the pilgrims throughout history have made way to the Shrine of Our lady. Ms. whether on foot, in wagons, horses or vehicles, as well as characteristic elements of the sierra, traditions and culture.

Picture of the Virgin

Within Andújar is situated at the end of the street Calancha, the Picture of the Virgin, the starting point for the pilgrims going to the Shrine. It is a small chapel built in the open air in 1610 by the maestro Rafael Pérez Ortega and rebuilt in 1856 to house a picture of the apparition of the Virgin of the Head. Today the table comes from the parish of Santa Maria by the destruction of the previous due to a fire.

Monument to the Carts

This monolith was inaugurated in the year 2004 alongside the well-known "Arroyo del Gallo" that crosses the road to the Sanctuary, and performed by D. ... The monument, made of stone, it represents a Cart that serves as a tribute to those first people who started this form of pilgrimage to the Shrine, and that with the passage of time has become one of the most popular and typical of our Pilgrimage, along the endless rows of horses and mules.

Monument to the Pilgrim

Artists Paco Holes and Manuel Lopez show all his skill in a work that recalls to always have the figure of the "Pilgrim eternal", by Manuel Álvarez Mora, the one who in life was a true samaritan with the people who decided to embark on the road to the Sanctuary. This monument have helped people like Francisco Cane and Saves, as well as Alfredo Ybarra, whose words tinged from the baroque to the place where it was erected in the middle of the mountain and is known as the Balconcillo.

Monument to the Pilgrim

The pilgrim has a meaning very special in the Procession, not in vain, on the right bank of the road, something above the Km. 15, was erected in 1986 an emotive memorial, which depicts a man showing the Shrine to a child who accompanies him.

It is located at kilometer 16.7 of the road to the Sanctuary (Andújar – Puertollano) and is popularly known as the "Stone that speaks"because on that stone appears a few verses, which in 1923 write José del Prado and Palacio, marquis of the Corner of San Ildefonso and the minister of Public Instruction in the reign of Alfonso XIII, who also paid for the construction of the monument itself.

Monument to the wild Boar Solo

This monument, a work of the artist andujareño Luís Hamlet, immortalizes the protagonist of the play "Solo" published by the writer Jaime of Foxa in 1961. It is located on the left side of the road shortly before the Km. 28 and was erected at the initiative of the disappeared "Athenaeum – Andújar", and joined the monteros de España and numerous entities.