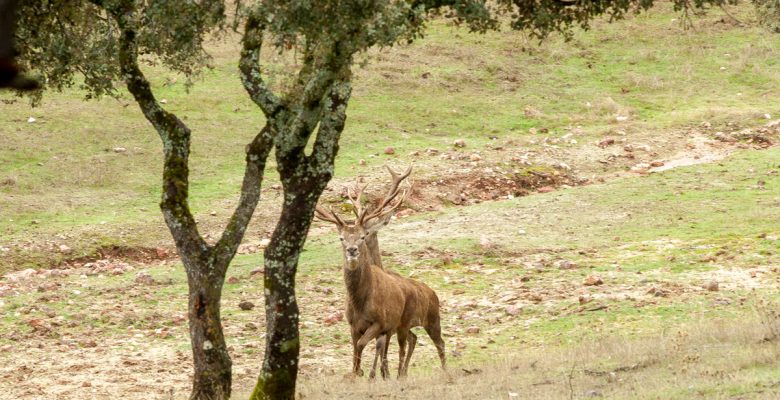 The Natural Park of the Sierra de Andújar, declared by Law 2/1989 of July 18 and Decree 108/1994 of may 10, which approves the Plan of Natural Resources Management and master Plan for Use and Management of the Park, is located in the northwest of the province of Jaén, on the city of Baños de la Encina, Villanueva de la Reina, Marmolejo and Andujar, the largest, and from which it takes the name of your saw. It has a surface area than 60,800 hectares and altitudes between 196 and 1291 m.

Its fauna includes a large variety of species classified as "endangered" in the present very reduced populations both domestically and globally. In these places they have found one of their last strongholds species such as the lynx, the wolf, the imperial eagle, the black vulture and griffon, the black stork or a mongoose.

Sport hunting is an economic resource of the first order,, thanks to the famous reserves, public and private existing. In them, deer, fallow deer, mouflon and wild boar are the pieces that are sought after by hunters of the peninsula and the world, who come annually to spots such as: Contadero, Sealants, New Place, Fontanarejo or The slag heaps for the traditional monterías.

Livestock is the backbone of the local economy, with large pastures dedicated to the breeding of fighting bulls. In parallel, the forest resources as the cork from the cork oak forests and timber are also of great interest. The appropriate exploitation of these resources has resulted in a very positive way in the conservation of other species, and ecosystems of the area.

In this park is to preserve areas of natural vegetation most extensive of the Sierra Morena, with forests of holm oak, gall oak and cork oak, and also plantations of pine. The shrub stratum or thicket is basically constituted by jara, broom, terebinth, strawberry tree, wild olive tree, mastic tree, oak, olivilla and aromatic plants such as rosemary, marjoram, thyme and toman.

The riparian vegetation along the rivers Jándula and Mares and a few streams, form important gallery forest of ash, alder, sargas, and oleanders that are a refuge for the species, and they are ideal places for observation. In the above-mentioned rivers is tolerated the practice of the sport of fishing, as well as in the reservoirs of The Boat, Encinarejo and The Rumblar where it is combined with other water sports, the simple contemplation of a landscape of unique beauty, or enjoy a field day in the recreation areas arranged on its shores.

Geologically, it is characterized by a small variety of materials, the northern half is dominated by shale, quartzite, and limestone or shale and sandstone, while in the south, dominated by granitic rocks. On one of these, in the heart of the Park and on the so-called Hill of the Head is the Sanctuary of the Virgin of the Head.