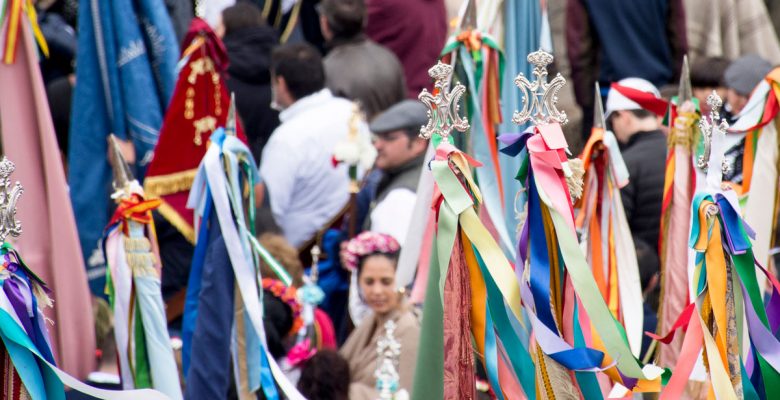 With the arrival of the month of April and easter Week, in the town of Andújar, begins the excitement, the anxiety and the nervousness of the iliturgitanos before the preparations for the celebration of their biggest party on the last Sunday of the month: the Procession of The Holy Virgin of the Head.

The preceding weeks, it fills the city of cultural events that fall within the so-called Portico of Pilgrimage. In these days annually Guild Array followed by the presentation of its publication "Looking to the Shrine", as well as names that will be your Brothers Distinguished. The numerous Rocks Mirabrás and Marian of the city have their own aggrandizement, and posters advertising the festival and the city Council organizes the election of the Romero gold and Rosemary of the year, as well as which will be the culmination of all these events, the Opening of Pilgrimage.

The Proclamation of the pilgrimage takes place the weekend prior to the Procession with which to open the big week. Pronounced for the first time in 1965, since then Andújar has been a witness of how the different criers have praised their Festival, its people and especially their land and their Virgin Brunette.

The Monday, Tuesday and Wednesday following, all will be demonstrations of honour of the Virgin mary, and cultural and artistic activities. Andujar decks, caring for and beautifying the environment, citizen, railings and balconies are hung shawls and flowers, as carpet is covered in sand to the streets of the tour to give security to the passage of the horses and numerous. In these days the City would receive the visit of family members, friends, and pilgrims who have come from all parts of our geography, waiting for the time to participate in the pilgrimage to the hill.

The two Sundays prior to the Pilgrimage, the Brotherhood Array with their badges, and accompanied by a music band that plays constantly known as the score of a Pilgrimage, visiting the parishes and social centers of the city in order to summon the neighbors to their participating in the festival. During this custom invitation popular people requested to the party among the scepter of the Older Brother in their homes, and kissed him a sick family member, or simply to bless your home.

On the morning of Thursday, the association Matrix, such as the Sunday previous, he toured the streets, squares and social centres, with their flags, their flag carriers would flit to the sound of the music. Already by the late celebrated the floral offering to the Blessed. Virgin, whose Image, which is a replica of the one in the Shrine and is transported to the door of his hermitage in the street Earthenware, where it is filled with flowers brought by the iliturgitanos dressed with the regional costume. The whole city is an explosion of joy and jubilation to return to see the Virgin of the Head in the street, receiving flowers and living of his people.

The Friday come to the city Brotherhoods Subsidiaries that are agasajadas by the people in the ejido of the old bridge on the Guadalquivir river, where the party walked through the streets of Andújar up to the door of the Chapel where will be held the Official Reception of Brotherhoods Subsidiaries on the part of the Brotherhood Array of Andújar. Each Branch comes with their badges, which are interwoven by way of greeting, endorsed by the hugs between the Boards and other components of the procession. Also welcome to the newcomers riders and riders, dressed in their finest and numerous carts that are concentrated in the gardens of Columbus. Finally, the Brotherhoods of receipt will be directed to the city Council, where you will greet attendees ending the act with a Solemn Salve.