Home/The Pilgrimage/Pilgrimage to the Shrine 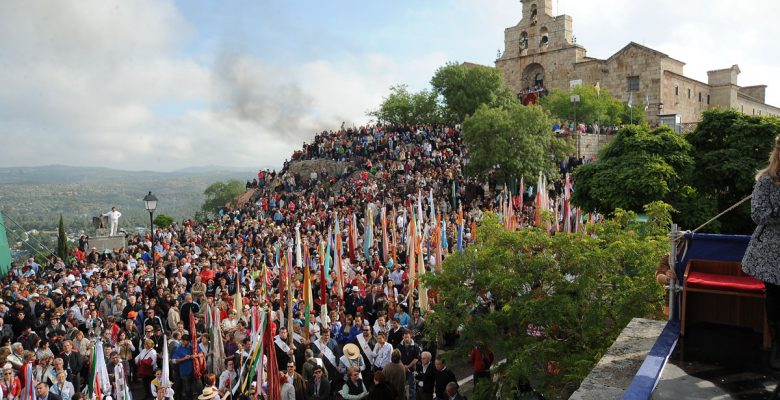 Pilgrimage to the Shrine

At dawn on Saturday, the rockets called to the pilgrims, who in carts, horses or vehicles starts their pilgrimage the Shrine. Carts, ordered by seniority, are the first to start his journey. In them numerous Rocks, Mirabrás, and Marian cross the main streets of the city, to go down the road of the string to the forest paths and tracks that will take you up the hill.

Meanwhile, in the house of the elder Brother, will form the procession in cavalry, which will be headed by two flags and followed by the children in mulillos, ladies mounted in precious jamugas and the essential music band. Then will come the rest of the flags, and after them, horsemen and horsewomen in their mules and horses, closing the members of the Council, before presidency and the presidency of the Brotherhood. The cortege will then be directed to the town Hall to pick up the Mr. mayor, and go after the main streets of the city.

The Brotherhood, after passing the cemetery, you will begin your pilgrimage on the camino viejo, or a horseshoe that will take you to the Hermitage of San Ginés, the first official stop of the road, where the cavalry coincide with the Wagon train. The small Hermitage, it serves the pilgrim of refuge and place of prayer as well as your surroundings become a place of recreation and rest to replenish forces of the early stages of the path.

After attending the output of the Brotherhood Array, the vehicles start their path on the road of the Virgin that will take you to the meadow of the New Place, where there is the reunion with the carts and horses whose ways, come back together at this point along the bridge of the River Jándula. It is the hour of the lunch, the singing and dancing in an indescribable joy of living together. The fall of the afternoon, again, are the carts the first to start on the path of the Membrillejo, while re-place the saddles of the cavalry to make the later stages of the old road, and the vehicle back to the road that will lead you to the Shrine.

Throughout Saturday, the various Guild Subsidiaries are coming to the Summit, and is organized in their homes to make your Presentation Saturday to the Image. From the hour of the angelus, the Brotherhoods happen in two and two in the interior of the temple, waving to the Stma. Virgin and signing in the book where there will be a record of your attendance at the Procession, finally placed the flag of your locality in the masts of the Shrine as a glaring proof of your participation.

The roads then become a tide of pilgrims, some kneeling, others barefoot to meet the promises made to Blessed. Virgin, a row of endless faithful who are going to their locker Room. To the middle of the night, end the presentation round, with the Brotherhood of Colomera and the Brotherhood Array of Andújar, after which it starts the recitation of the Holy Rosary sung and the candles, by the mysteries of the Roads. During the whole night, not missing anderos, which, clinging to the staves of the litter, keep the place the next day to engage in the procession of Our lady. Mrs, while in the interior of the temple is happening the masses for those who stand up to hard drink in a cheerful insomnia shout until the break of dawn.

On the morning of Sunday, all Brotherhoods Affiliates go up the sidewalk to attend the Solemn Mass celebrated commonly by Mr. Bishop of the Diocese in the market of the Sanctuary. The corporations are arranged along the walkways that surround the altar of the campaign as a representation of each Guild access to the Altar of the campaign, along with the Brotherhood of Colomera and the Brotherhood Array of Andújar which presides over the celebration.

After the eucharist, will begin to form the procession, opening the cross parish in the Sanctuary followed by a flag of Andújar and another of Colomera, behind all the Brotherhoods Affiliates in order of seniority, and closing parade of the Brotherhood of Colomera and the Brotherhood Array of Andújar. Finally, about 12.00 hours will take place on the transfer of the Stma. Virgin, from the chapel to his platform processional, between a mass euphoric of devotees and the incessant tañir of bells that will not stop while the Image goes out of his Sanctuary.

Two trinitarians, uploaded to the litter to one side and on the other of the Image, are taking the children that they are elevated up litter to be blessed by the Stma. Virgin, also are taking the objects that the pilgrims throws them to be touched by his cloak. Back to his temple, the Image is again moved from his walk to the locker room by reference, with the greatest enthusiasm, if possible, the same scenes of the output and between tears, palms and vivid, the Image is again enthroned on the altar. Late in the afternoon, and with the calm that produces the emotion expressed, is the Mass of Rocks, mirabrás, and marian, and behind it the prayer of a Solemn and Magnificent.

The next day, the Brotherhood Array is routed back to the Sanctuary, where you will place the farewell ceremony of the Stma. Virgin. Soon begins the return, of horses, carts and vehicles, each one to his own way taking as distinctive unmistakable of your stay in the Sanctuary the state, which will be distributed in their places of origin, as well as, the arabian lavender and rosemary that will adorn vehicles and carts, a very traditional announce that it has been in the Sanctuary.

By the way, all will stop again in the new Place, next to the Bridge of the Virgin to rest and have lunch, starting in the afternoon the road that will take us to San Gines following mandatory stop before you get to Andújar. The entire city comes out to receive the Brotherhood Array, and all the pilgrims in carts and cavalry arrive tired of the journey, but with a renewed spirit to face a new year of waiting to re-live the Pilgrimage of the Virgin of the Head.